Learn to Love Your Ear Wax: 5 Ways it Protects Your Hearing 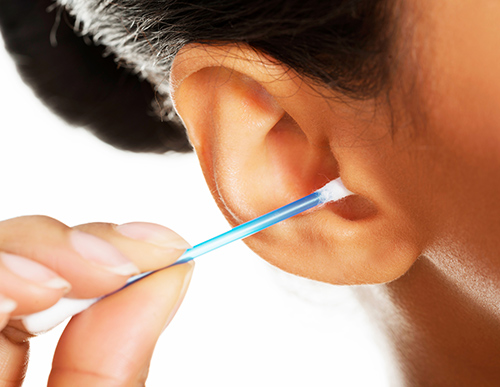 Ear wax may look worse than over boiled mush, but it’s actually one of your ears’ best friends. So if you’ve spent years digging it out of your ears with swabs or other pointy objects, stop. The American Academy of Otolaryngology-Head and Neck Surgery (AAO-HNS), your hearing care professional and the warning on the side of that box of swabs all echo the sage wisdom of your grandmother: Do not stick anything smaller than your elbow into your ear—and that includes swabs. Here’s 5 reasons why:

Cerumen is a special ear cleaning solution that you should use to clean out your ears. And cerumen, by any other name, is ear wax. Special glands in your ears produce it for cleaning and other ear health benefits. So stop trying to dig it out like it’s some kind of nuisance, because it isn’t.

Cerumen traps dirt, dust and debris, detouring it away from going deeper into your ear canal. Then, as you go through your day talking, chewing and yawning, those actions actually move the soiled ear wax down and out of the ear canal where you can easily wipe it out with a washcloth during your shower.

What’s more, if you try to dig out the ear wax with a fingernail, swab, fork, pencil, key, chopstick or other pointy foreign object, you’re actually reversing your ears’ self-cleaning mechanisms by pushing soiled cerumen further into your ear canal with all the dust and dirt it’s collected. Over time, soiled ear wax can build up as it gets shoved into the ear canal, blocking your ear drum. This is called “ear wax impaction” and it’s not pretty or helpful.

So while ear wax isn’t what we think of as pretty, nor would anyone like to eat an ear wax flavored Bertie Bott’s Every Flavor jellybean, cerumen is especially designed to benefit your ears and keep them health in several ways. Several glands lining the inside of your ear canal produce a special recipe of cerumen just for your own ears. This recipe isn’t actually wax, though it creates the waxy substance we know and love out of long-chain fatty acids, sebum, cholesterol, alcohols, enzymes, sloughed off skin cells and other chemicals. This ear wax stew has some great properties:

You may already have sustained some level of hearing loss, just from the process of swab-based ear wax removal habits. This type of ear wax removal actually shoves soiled, old ear wax further down into the ear canal where it can become impacted and cause hearing loss. If you’ve been doing this for years, schedule an appointment with your hearing care professional to have them check whether you have impacted ear wax that might be causing some amount of hearing loss.

Now, you may be one of those people who actually do have a problem with ear wax (beyond just wanting it gone). Some people make too much, while others don’t make enough. Occasionally, it may be too wet, too dry or not have the right balance of ingredients to get the job done right. Nevertheless, you still shouldn’t try to remedy or clean it out yourself with a swab or anything else (smaller than your elbow). If you’re worried about the health of your ear wax, please get in touch with your hearing care professional for an evaluation.

Every day, at least 34 children somewhere in America are carted off, in tears and pain, to the doctor’s office with tympanic membrane tears, cuts and lacerations from ear cleaning accidents. Sometimes the parents are a little too keen on digging out the ear wax, but sometimes it’s the kids who are learning this bad ear cleaning habit from their parents and lack the fine motor skills to do it without harming their ears. Either way, this is something the entire family needs to stop doing. Remember what grandma said: Nothing smaller than your elbow goes into your ear, or you could suffer pain and hearing loss.

Some of you out there may be wondering out loud about the “natural” ear cleaning technique called “ear candling”. Thousands of years ago, someone apparently thought it was a good idea to stick a hollow tube into the ear and set it on fire. But it’s a bad idea with no science behind it, although the practice doggedly remains displayed in health food stores across the nation. Here’s what you should know about ear candling:

5. The Best Way to Clean Ears

Take a shower. Nothing complicated. Nothing crazy—just a shower. Wipe gently around the outsides of your ears with a washcloth so that you rinse away spent ear wax that’s already been deposited outside of the ear canal. Then towel off, dab your ears dry and that’s it! And keep your hands off of the swabs.

Schedule an appointment with your hearing care professional if you’ve been cleaning your ears with swabs for years, if you suspect you have hearing loss or would like to know more about any ear health issue, including ear wax!