Hearing is an essential part of a musician’s ability to engage in their art.

While there certainly are some very talented deaf and hard of hearing musicians, most of us rely heavily on our sense of hearing to evaluate our compositions and recordings, determine whether or not we are playing in tune, in time, and at an appropriate volume, judge the timbre and articulation with which we play, and simply enjoy the music we create. The irony of being a musician is that too much exposure to the sound that we are constantly immersed in can cause hearing loss, which diminishes our ability to create and appreciate the music we love so much!

Noise-induced hearing loss (NIHL) is permanent. It cannot be reversed. Often, it manifests as a loss concentrated around 4 kHz (a “notch”), however it can appear in other configurations. One of the most dangerous characteristics of NIHL is the fact that it happens gradually, and is often unnoticeable until significant damage has been done. The longer you are exposed to loud noise, the more damaging it can be, and the louder the sound is, the shorter the window of safe exposure. For more info on the dangers of noise exposure, check out this video.

So what is a musician with hearing loss to do?

Hearing aids are typically geared towards speech perception. However speech and music are very different, and the techniques that hearing aids use to enhance speech perception can be detrimental to music appreciation. The good news is that hearing aids are capable of providing benefit for music listening, but a typical fitting geared toward speech is not optimal. Understanding the differences between speech and music is essential in selecting a programming the best hearing aid.

If you are a musician with hearing loss, or are concerned about protecting your hearing, we want to hear from you!

Typical audiometric tests measure hearing thresholds in between 250-8000 Hz (approximately B3-B8), as this is the frequency range most important to speech perception. However, humans are theoretically capable of hearing sounds as low as 20Hz and as high as 20,000 Hz, and many styles of music utilize the majority of this range. Traditional hearing tests neglect everything below B3 as well as the range above 8000 Hz, which contains harmonic information valuable in defining the timbre of musical instruments. At Toronto Hearing Services, we will assess your hearing with music perception in mind. High-frequency testing can also reveal early warning signs of undetected hearing loss which is due to noise exposure, as the highest frequencies are often the first to go. 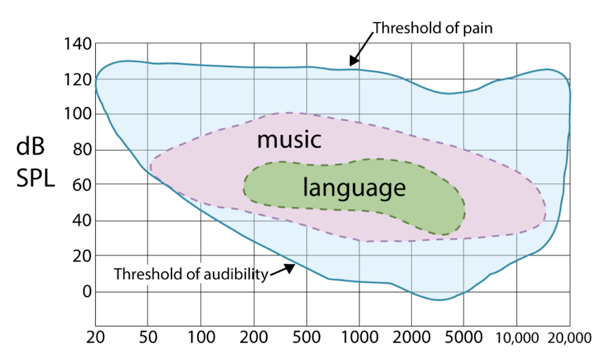 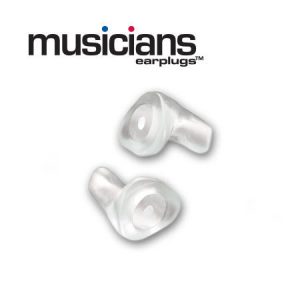 Traditional foam and plastic earplugs block out more high frequencies than low. This results in a muffled sound, making it difficult to judge the timbre of your instrument as well as how well you are blending with other players. It also blurs nuances in your playing, and can ultimately make the experience of performing music less enjoyable. For these reasons, many musicians choose not to wear ear plugs, even at dangerously high sound pressure levels.

Customized musician’s earplugs on the other hand, provide a more even frequency response, letting more high frequencies through as compared to traditional plugs, while still providing sufficient protection. Once your custom ear molds are created, different attenuators can be used to provide protection at 9, 15 or 25 dB. Although many people are inclined to think more protection is better, this is not always the case. The most appropriate level of protection depends on what instrument you play and what types of ensembles you play in. At Toronto Hearing Services, we will work with you to determine the most appropriate level of protection, based on your individual needs. 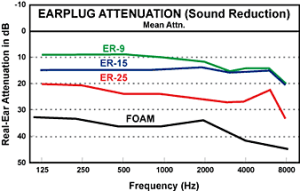 Note the steep drop above 2 kHz and bass boost with foam plugs. This results in a muffled sound.

There are multiple benefits to in-ear monitors. First and most obviously, they provide superior fidelity in on-stage monitoring. Wedge monitors are often ineffective, drowned in a sea of bad stage acoustics and limited by feedback levels. The sound of your monitor mix is also restricted to a particular area of the stage, limiting your ability to move around while playing. Monitor levels can be dangerously loud, causing irreversible hearing damage. In-ear monitors on the other hand act as ear plugs, reducing the overall stage volume, also allowing your monitor mixes to be much quieter, clearer, and sounding the same, no matter where you are onstage. Custom-molded in-ear monitors are ideal as they provide a tight acoustic seal in the ear, allowing for lower monitor levels, less hearing damage, and a clearer, cleaner sounding mix.

Some people find that hearing aids fall short when it comes to music perception. This is because hearing aid technology has traditionally been focused on speech understanding, and hearing aids are typically programmed with a focus on speech. Music is very different from speech, but modern hearing aids are capable of amplifying music effectively if chosen and programmed properly. However, proper programming also requires an intimate knowledge of how music is created, performed, and perceived. Andrew Lauzon is our resident audiologist focused on hearing loss and music. Andrew has spent over 10 years as a professional musician, composer and producer before training as an audiologist and joining our team at Toronto Hearing Services. Click Here to learn more.

Spend an hour with our resident musician/audiologist, who will evaluate your lifestyle and work/gigging situations to determine the amount of noise you are routinely exposed to, and what you can do to protect your hearing from permanent damage.

An ounce of prevention is worth a pound of cure, and there is no cure for noise-induced hearing loss. Educating yourself on the dangers of noise exposure may be one of the best investments you can make in your career.

Why wait? You don’t have to live with hearing loss.

Why wait? You don’t have to live with hearing loss.

Call or Text Us

About our resident musician/audiologist, Andrew Lauzon

I have been obsessed with music since I was 13 years old. For many years, it was all I ever wanted to do, and for the better part of the last 2 decades it is exactly what I did. As a guitarist and bassist, I’ve toured throughout the US and Canada, sharing bills with major-label artists (including the Van’s Warped Tour – RIP), travelled to Egypt to entertain our military service men and women, and have played on countless studio recordings. I am also a member of the Grammy-nominated punk/metal/comedy act Green Jelly, have composed music for film and television (including this bit from Superbowl LI), and have produced/engineered a slew of recordings for bands and solo artists. Along the way I became interested in acoustics and neuroscience. These newfound passions, coupled with a desire to help others, eventually led me back to school to become an audiologist.

I personally have a slight high-frequency hearing loss in my left ear. Most people would likely not notice a loss so subtle, but a couple of years ago recordings started to sound unbalanced to me. This concerned me greatly. After all, I depended on my hearing to make a living, and mine has always been pristine!! So I had my hearing checked. And checked again. And again. Same results every time. Then it sunk in. I HAVE HEARING LOSS. It’s probably from standing on the right side of too many drummers and not wearing hearing protection consistently enough throughout my career. Some might scoff at my reaction to such a slight hearing loss in only one ear, but this was a big deal to me. I have since been more protective of my hearing, but the damage is done. So, I understand hearing loss on a technical level, but more importantly from the perspective of someone who values their ability to hear very highly, and relies on it for his livelihood. 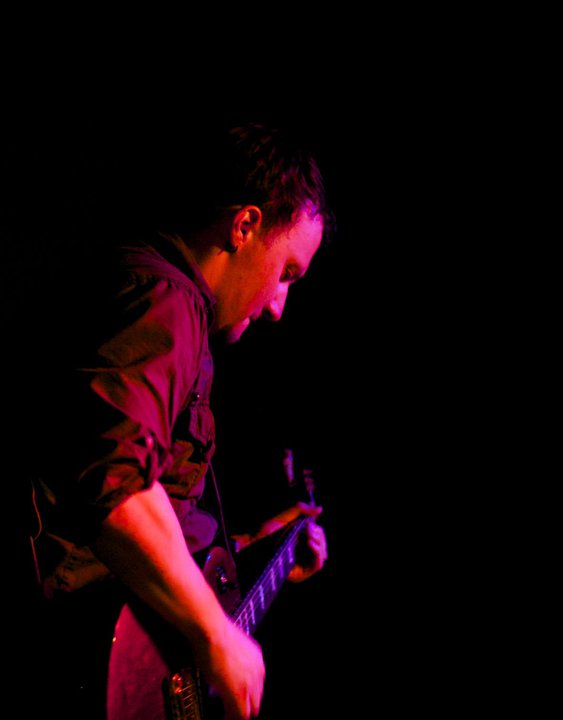